Seeing God in the Storm 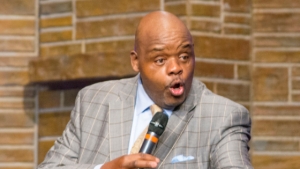 We must see what God is up to during this critical time. We were wired to see what He’s doing and know how He would have us to respond.

Things you must know in seeing God in the storm:

He Placed You Here

45 Immediately He [a]made His disciples get into the boat and go before Him to the other side, to Bethsaida, while He sent the multitude away.

They were in the storm in the will of God. Say to yourself, since He placed me here, He must have a plan for me. Storms are not purposeless—they are purposeful.

There are two types of storms:

“Sometimes we can only learn a lesson in the middle of a storm.” Pastor Billy R. Johnson

He Is Praying For You

46 And when He had sent them away, He departed to the mountain to pray. 47 Now when evening came, the boat was in the middle of the sea; and He was alone on the land.

Hebrews 7:25, Therefore He is also able to save [a]to the uttermost those who come to God through Him, since He always lives to make intercession for them.

48 Then He saw them straining at rowing, for the wind was against them…

He is watching you. He is aware of what is going on with you. Even though He sends angels to watch over you, the Father still has His watchful eye on you.

He Comes to You

48 … Now about the fourth watch of the night He came to them, walking on the sea, and would have passed them by.

He was walking on what was trying to destroy them. In your storm, you have to know that He’s coming to you. He’s revealing Himself in the storm like ways you’ve never seen.

He Communicates With You

50 for they all saw Him and were troubled. But immediately He talked with them and said to them, “Be[b] of good cheer! It is I; do not be afraid.”

In this text, nothing about the storm had changed, He just simply spoke. Before He stops the storm around you, He must stop the storm within you. His communication should be the calming effect—the assurance that you are okay.

He Climbs In The Boat With You

51 Then He went up into the boat to them, and the wind ceased. And they were greatly amazed in themselves beyond measure, and marveled.

When you get Him aboard, the storm ceases. When He wants to get in the boat with you—Let Him. The goal is to see Him in the storm.

Dr. D’Ann Johnson
What it is Going to Take to Follow Him

How Do I Transform?
Scroll to top