Realize God’s Purpose In Speaking To Us 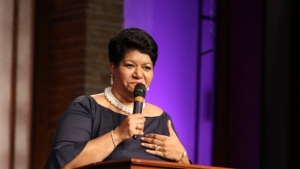 God speaks to us for several reasons including the following:

To Help Us Locate Ourselves

Genesis 3:9 – Then the Lord God called to Adam and said to him, “Where are you?”

When God speaks to us and asks a questions, He is not asking because He doesn’t know the answer.  He is asking to see if we have a true understanding of where we are.

“Where are you in relationship to me?” – Dr. D’Ann Johnson

Question #2 – To whom have you been listening?

We have to grow up to the point where we can hear God even when He is not telling us what we want to hear.

“Maturity is when you can take the good AND the bad.” – Dr. D’Ann Johnson

Question #3 – In what have you been disobedient?

Genesis 3:11b – Have you eaten from the tree of which I commanded you that you should not eat?”

To Give Us Direction

John 10:4 – And when he brings out his own sheep, he goes before them; and the sheep follow him, for they know his voice.

The Sheep Hear the Voice of the Shepherd

When God gives directions, we as His sheep ought to give audience to His voice.  The issue for some is that they do not know the voice of God.

The word follow in verse 4 is used for soldiers, servants, and students.

The Sheep Don’t Consider Any Other Voice

John 10:5 – Yet they will by no means follow a stranger, but will flee from him, for they do not know the voice of strangers.

To Change Us and Re-Establish Our Purpose

In spite of the fact that everything in Paul’s life seemed to establish that he would be useless to God, God knew different.  Some people require a “knock-you-off-your-horse” moment, especially when your future looks nothing like your current circumstance.

Between chapters 2 and 3 of Revelations, seven times throughout scripture you see this saying, “He who has an ear let him hear what the Spirit is saying (says) to the church.”

To Break Our Traditions and Broaden Our Vision

This all happened because God’s vision was greater than Peter’s tradition.  God’s vision included us, the Gentiles.  In essence, God is saying to us that we must drop your traditions and expand your thinking because I’m too big for your thinking.

Mark 7:13 – making the word of God of no effect through your tradition which you have handed down. And many such things you do.”

Pastor Billy Johnson
Do You Have a Living Faith?