Acting on the Will of God 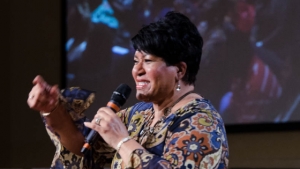 The Book of James is often called the Proverbs of the New Testament.  It’s often concerned with the practical applications of faith.  In Chapter 1, James begins with the testing of our faith.  In Chapter 2, the first 13 verses, James talks about impartiality of faith.  And in the latter half of chapter 2, James talks about the partner to our faith: works.

James 2:14-17
14 What does it profit, my brethren, if someone says he has faith but does not have works? Can faith save him? 15 If a brother or sister is naked and destitute of daily food, 16 and one of you says to them, “Depart in peace, be warmed and filled,” but you do not give them the things which are needed for the body, what does it profit? 17 Thus also faith by itself, if it does not have works, is dead.

Can faith save you if you do not have works to go along with it? But we cannot work for our salvation.

When you take care of people who don’t have it is just like you are taking care of Jesus.

“Works do not save us, but those that are saved ought to have some works.” – Dr. D’Ann Johnson

You can pray the will of God all day long but if you don’t get up and do something you are wasting your time.  Don’t get faith and works twisted.  If you believe there should be some signs.

James 2:18-21
18 But someone will say, “You have faith, and I have works.” Show me your faith without [f]your works, and I will show you my faith by [g]my works. 19 You believe that there is one God. You do well. Even the demons believe—and tremble! 20 But do you want to know, O foolish man, that faith without works is dead? 21 Was not Abraham our father justified by works when he offered Isaac his son on the altar?

Genesis 15:6 – And he believed in the Lord, and He accounted it to him for righteousness.

Once Abram believed God he was given right standing with God.  He did not have to do work or anything; just believe.

Yet in Genesis 22, we see that God asks Abraham to take the answer to his prayer (his son), and offer it back up to God.  Now Abraham has what he prayed for and was now being asked to kill his son.  Does Abraham really believe?  Abraham went and put Isaac on the altar.  Once Isaac was on the altar, God stopped him from killing Isaac because Abraham had demonstrated his faith.

“The conclusion is not successful if it’s not God’s will.”  – Dr. D’Ann Johnson

“You and I cannot walk fully in faith without walking fully in obedience.” – Dr. D’Ann Johnson

Examples of Faith and Works

James 2:23-26
22 Do you see that faith was working together with his works, and by works faith was made [i]perfect? 23 And the Scripture was fulfilled which says, “Abraham believed God, and it was [j]accounted to him for righteousness.” And he was called the friend of God. 24 You see then that a man is justified by works, and not by faith only.25 Likewise, was not Rahab the harlot also justified by works when she received the messengers and sent them out another way?  26 For as the body without the spirit is dead, so faith without works is dead also.

Faith and works were also displayed in the life of Rahab, the outcast.  Rahab knew enough ABOUT this God that she believed in what He could do.  Note that Rahab is also in the direct lineage of Jesus.

Faith and works are like two legs.  Each leg works in concert with the other.

Obedience plus Faith gives us the fullness of the will of God.

Pastor Billy Johnson
Do You Have a Living Faith?
Scroll to top