Come Out From Hiding 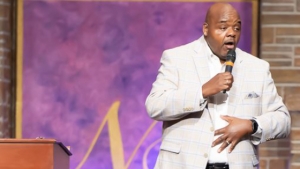 In this text, we see the first game of hide and seek but in this game, man isn’t hiding from other men, but he is hiding from the Presence of God.

We serve a self-existent, almighty God, yet, in our efforts to relate to God, we reduce Him.  But God is “other”.  He is holy! There is nobody like God.  There is nothing to hard, nothing too difficult for God.

“Anytime you start talking to the devil, you’ll get off track.” – Pastor Billy Johnson

They had eaten from a tree that was forbidden after conversing with the serpent who told them they could be “like God.”  The issue was they were already like God, as they had been made in His image.

They Were Naked and Ashamed

Genesis 3:7 – Then the eyes of both of them were opened, and they knew that they were naked; and they sewed fig leaves together and made themselves coverings.

“When we try to hide from God, we look like little children [playing hide and seek]” – Pastor Billy Johnson

What are you hiding behind?

Some people hide behind success.

Some people hide behind failure.

Some people hide in pain.

Some people hide behind poor self-image.

Some people hide in strength.

Some people hide in weakness.

Some people hide in pride.

“It is worth removing the leaf and letting God see you.” – Pastor Billy Johnson

“God will come after you because He wants to be with you.” – Pastor Billy Johnson

As God came after Adam,

God Called Them
In verse 9, the first thing God did was called to Adam, “Where are you?”  Now God knew where Adam was, but He wanted Adam to know.  Adam replied, “I heard Your voice in the garden, and I was afraid because I was naked; and I hid myself.”  Please know that even when you go astray, you can still hear His voice.

“Even when we are in sin, God can still talk to us.” – Pastor Billy Johnson

God Confronted Them
In verse 11, God asks, “Who told you…”  And the blame game begins.  Adam blames Eve and God saying, “It’s this woman You gave me.”  Then Eve blamed the serpent.  Today, we don’t like to be called out for our wrongdoings.  But in order to be in God’s presence, we have to be there in truth.

“Without confrontation there can be no correction.” – Pastor Billy Johnson

The confrontation is to get us to admit it.

The confrontation is to get us to confess it.

The confrontation is to get us to quit it.

God Covers Them
After all of this, God made tunics of skin and clothed them.  This is a New Testament picture of Jesus Christ.  Because of Jesus’ sacrifice and resurrection, He has clothed them that believe in righteousness.

Dr. D’Ann Johnson
Our Response to the Presence of God