A Faith Jesus Can See 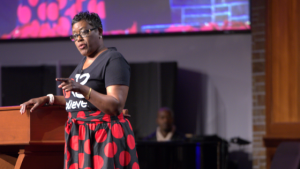 17One day while Jesus was teaching, some Pharisees and teachers of religious law were sitting nearby. (It seemed that these men showed up from every village in all Galilee and Judea, as well as from Jerusalem.) And the Lord’s healing power was strongly with Jesus. 18Some men came carrying a paralyzed man on a sleeping mat. They tried to take him inside to Jesus, 19but they couldn’t reach him because of the crowd. So, they went up to the roof and took off some tiles. Then they lowered the sick man on his mat down into the crowd, right in front of Jesus. 20Seeing their faith, Jesus said to the man, “Young man, your sins are forgiven.”

21But the Pharisees and teachers of religious law said to themselves, “Who does he think he is? That’s blasphemy! Only God can forgive sins!” 22Jesus knew what they were thinking, so he asked them, “Why do you question this in your hearts? 23Is it easier to say, ‘Your sins are forgiven,’ or ‘Stand up and walk’? 24So I will prove to you that the Son of Mand has the authority on earth to forgive sins.” Then Jesus turned to the paralyzed man and said, “Stand up, pick up your mat, and go home!” 25And immediately, as everyone watched, the man jumped up, picked up his mat, and went home praising God. 26Everyone was gripped with great wonder and awe, and they praised God, exclaiming, “We have seen amazing things today!”

What did Jesus see in them that caused this man’s sin to be forgiven and for him to be physically healed. We often think of faith for us as a measure of faith. God has given all of us a measure of faith. The scripture says that Jesus saw their faith and he received healing. What was it about their faith that Jesus saw that caused Him to want to heal the man. Our faith may depend on someone else’s faith. We are all in here because somebody prayed for us.

There are three characteristics of the men’s faith that should be manifested in our lives.  We must have a: