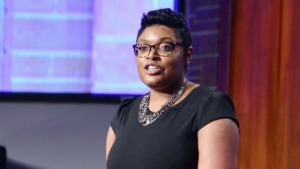 First, I give my sincerest salutation to the graduates.  Thank you to Pastors Bill and Aunt D, who have literally watch me grow up and supported me on my journey, for inviting me to address you.  And thank you to the elders of this church who have known me since childhood and, also, watched me grow.  And of course all the love, gratitude and respect I can muster for my parents, Timothy and Sonja Gore.

I got the call to give remarks and I was overwhelmed with joy, but also doubt.  What could I possibly say to you, the illustrious graduates and members of this congregation, knowing that I still have benchmarks that I want to each and knowing that I am not exactly where I want to be?  I had just gotten off a flight when I received the call.  After I took my phone off airplane mode, I immediately call my mother, and asked if I should accept.  And my mom, who recalled the words of Mordecai, said, “Who’s to say you weren’t called for such a time as this?”  and it was a done deal.  So I’m thrilled to be in front of you, this church and these people, who were very much an integral part of my childhood and coming of age, to share parts of my personal story, but also to encourage you into the next phase of your life.

I didn’t come from a family of doctors and am actually the only doctor in my family that I know of.  We all remember being in grade school and people asking “What do you want to be when you grow up?”  You name it and I’ve probably wanted to do it.  I remember getting a Kenya doll one Christmas, and that was revolutionary in the early nineties because she came with her own hair grease.  So I thought I wanted to be a hair stylist.  My mom would make our clothes growing up, beautiful dresses, and with the fabric scraps I would make clothes for my Barbie dolls.  So, at one point I wanted to be a fashion designer.  Then I got it in my head that I wanted to be a physician and I never gave that idea up.  Along the way, my parents saw I wasn’t letting that dream go, so they encouraged me and helped me as much as they could, be it encouraging me in my AP studies or, unbeknownst to me, taking out a loan so I could attend that expensive summer intensive pre-med program out of state.

Looking back, I remember something that I don’t think my Dad even remembers because it was so minute.  He was showing me how to check the oil levels and put oil in my old hand me down Honda.  I was putting the oil in the reservoir and he said with excitement, “Look at that! Your hands are so steady!  Those are the hands of a surgeon!”  He spoke such life into me and didn’t even know it. I knew I wanted to be a doctor but I had no idea that I wanted to be a surgeon.

So, I worked hard, made the grades, and went to my college of choice as a pre-med major.  I remember early in the first semester of my freshman year meeting with the pre-med advisor at Furman University in Greenville South Carolina, Dr. Thompson.  Midterm grades hadn’t even come out yet and she told me that I wasn’t cut out for medicine and should change majors as soon as possible.  How?  Why?  I just wanted guidance on classes not an indictment on my future.  But the race wasn’t given to the swift or necessarily the smartest.  Approximately 15 black students started out as pre-med in my class and I’m the only one that finished pre-med.  Later, the same woman who told me that I should quit would ask for my advice on how to get more students into summer pre-med programs.  Which leads to my first point and a lesson I had to learn very quickly, and that is to be mindful of the messages you receive and accept.  Don’t allow messages of defeat to enter your head space.  Don’t allow people to fill you with a negative energy.  Don’t allow others’ insecurities to be projected onto you.  You are not who the world says you are.  You are who God says you are.

In college I started writing down what my goals and dreams were.  At this point I wasn’t even thinking about the spiritual side of writing down my goals.  All I knew was that people did it for everything else, such as what they will want in a mate so why not do this for what I want in my personal and professional life?  My second point is to write your vision. Habakkuk 2:2-3 says “Write down the vision; write it clearly on clay tablets so whoever reads it can tell it to others.  It is not yet time for the message to come true, but that time is coming soon; the message will come true.  It may seem like a long time, but be patient and wait for it, because it will surely come; it will not be delayed.” So I ticked off this long list of goals and exactly where I wanted to be.  I even wrote down these random major cities where I wanted to live.  One of my dreams was to live in New York.  Seventeen whole years later God grant me the desires of my heart, including that seemingly random moved to New York City.  Write your vision.

So, I’m rolling through college and it is time to apply to medical school.  Life comes at you fast sometimes!  Reality hit me with the headline.  I was not accepted to a single medical school the first time I applied.  Imagine how hurtful and devastating that is for someone who is a high achiever where everything was always yes!  For the girl who had been telling everyone who would listen since she was 10, 11 years old that I going to be a doctor.  I felt that I proved myself at every turn.  Were the naysayers right?  But you must remember that man’s NO isn’t God’s NO.  But now I had to regroup and figure out what I was doing.  I had a friend who was moving to Washington, DC to get a master’s degree in public health after college.  He knew some of my career goals and encouraged me to do the same.  Funny enough, I hadn’t really thought about it, but attaining my MPH was actually one of the goals on my list.  So I had to take another route and I ended up in DC at George Washington University.  The experience stretched me.  I worked in a law firm full time during the day and went to school full time at night.  I had to perfect my study habits.  I had to retake the medical school admissions test.  I was always focused but graduate school truly taught me discipline.  Working for those attorneys taught me the value of time.  They eventually gave me more responsibility outside of being the receptionist and I ended up helping with estate planning documents and investments. I learned that you cannot be mediocre and expect excellent results.  Did I really do everything I could have done while in college to show God that I was ready for the responsibility of caring for others’ lives?  I always depended on being smart and this time that wasn’t good enough.  I got my act together, reapplied to medical school and was accepted.  But I think that acceptance was because I showed that I was ready.  This time I had to change my work habits.  The Lord wasn’t really trying to put new wine in old wineskins [Mark 2:22]

The deeper I’ve got into my career and life the more I realized I needed God.  And the more I also realized that I need to protect the gifts and vision he gave me.  While in residency, I had one senior surgeon who made it his personal campaign to get rid of me.  I spent a lot of days dreading work.  A general surgery residency is brutal, sometimes over 100 hours per week.  So I’m working all day and spending many nights crying out to God.  Why do you have me here?  I’m obviously here for a reason but folks have it out for me.  But what is in a name?  My integrity, work ethic and character spoke for itself.  The program was a flighty, but solid.  My program was Saul.  And I also realized that the moves you make are sometimes between you and God.  Everyone doesn’t need to know everything you are doing and everything God told you.

In Genesis 15 after the Lord promised Abram that He was going to bless him and make his descendants as plenty as the stars in the sky, He told Abram to bring him a calf, a goat, a ram, a turtledove and a pigeon for a sacrifice.  Abram does what is asked of him, killed the animals, cut all of them, except for the birds, in half.  But it is often overlooked in verse 11, what stood out to me one day, was that it says vultures swooped in to try and eat the carcasses of his sacrifice but he chased them away.  Who is swooping in on your sacrifice and gifts to God?  If we’re going to honor God with our gifts we have to value them and protect them.  I encourage you to do the same.

I want to leave you with a few thoughts.  Be disciplined and set a code of conduct for yourself that you will be proud of.  Be a person of your word and do what you say you’re going to do.  Be kind to others, for some have entertained angels without realizing it [Hebrews 13:2].  You will be tested.  Push forward.  Your character will be assassinated, but push forward.  You will cry and question what you’re doing.  But remember that weeping endures for a night, sometimes many, but keep going.  Joy always comes in the morning.  You’ll want to give up, but don’t.  Always look onward, but more importantly look upward.  When you think you have made it, remember whom your help comes from.  Be proud of what you’ve accomplished, because everyone in this room, including me, is proud of you.  And with that I leave you with the following words:

“The Lord bless you and keep you;
The Lord make his face
Shine upon you,
And be gracious to you.
The Lord lift up his countenance upon you
And give you peace.” [Numbers 6:24-26]

Dr. Charlie Frazier
You Are Worth It

Pastor Billy Johnson
The Be-Attitudes of Fathering
Scroll to top