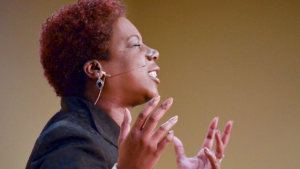 Daniel 1:1 – Babylon is the world system.  It means the world came to the church and besieged it.  Babylon (the world) went to Jerusalem (the church) and pulled out the smart and good-looking young people.  These are the ones the world is coming to get.

“We are so worried about our bills and our possession that [we don’t notice] the enemy is coming to get our young people.” – Pastor Ferne Sapp

Oftentimes we let our children dress like the world and listen to its music.  The world is coming for our young people but we need to separate them.  Separation is not easy. We become so accustomed to the culture of the world.

The world system is based upon false beliefs. The enemy comes to steal, kill and destroy.  Because this is his activity, he has to have a system by which this is possible.  The world says there is a system in operation that comes to steal your ideals and your identity.  And the world requires everyone to conform to what it says is right.

Daniel recognized that the Babylonians were trying to change his way of thinking his tastes, trying to force compromise.

How Does Separation Come?

The bible says that faith comes by hearing, and hearing by the Word of God.  We must hear the Word.

When we come to church we are encouraged in our faith.

3. Have time of devotion.  Devotion is not just reading the world but studying the word.