Wrestle With God Until He Changes Your Story 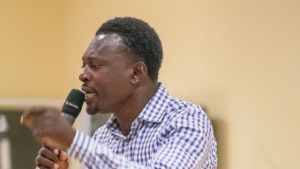 In 1 Samuel 1:1-20 we see Hannah who desperately wanted a child, yet remained childless.  Back then if you did not have a child you were considered cursed.  Until one day she got up and said, “I am going to talk to God more than I ever have.”

“Some of you are on Facebook for fourteen hours and can’t give God ten minutes.” – Prophet Martin Kumi

Hannah said she was tired. Some of us say you that we are tired but we don’t changed.  Hannah went to the house of the Lord and wrestled with God and he changed His mind.  He opened her womb.

In Mark 5 we find the woman with the issue of the blood.  Why did it take twelve years?  It took twelve years because she wasn’t tired yet. Some of you on your job say you are tired but what change are you making?   When she wrestled with Jesus the blood stopped.

In Genesis 12, God told Abraham to leave from his people because he wanted to do something with him.  Abraham wrestled with God and he finally told Lot he had to go.  Once he and Lot separated, God told Abraham – “Look afar of as I have given you this…”.

In Genesis 27:1-35, we find Jacob.  Jacob and Esau were brothers, with Esau being the oldest.  Yet, Jacob stole his brother’s birthright.  Tired of running from his family, Jacob decided to return home.  On his way Jacob wrestled with God.  After wrestling with God, his name was changed to Israel.